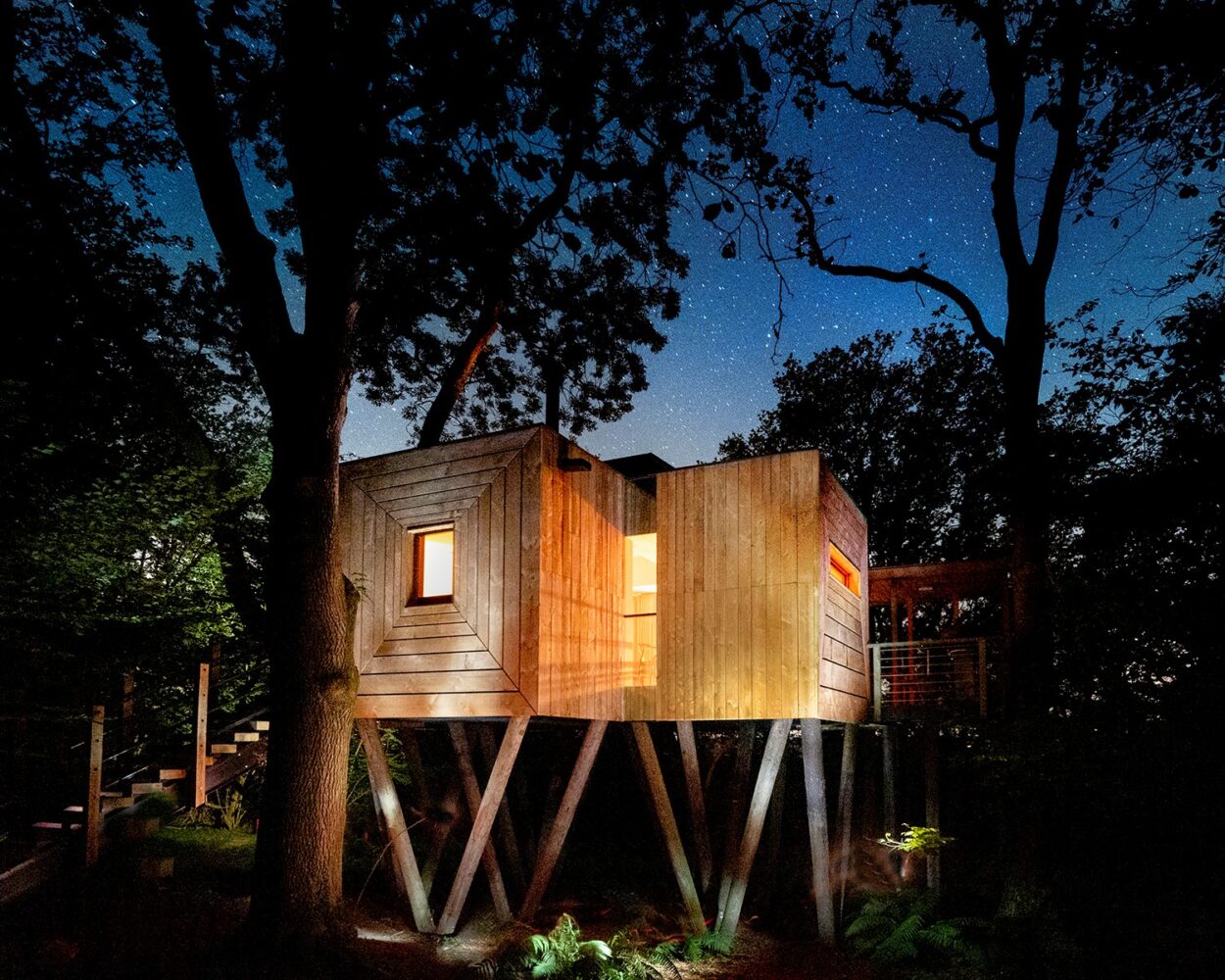 Guy Mallinson originally trained as a cabinet maker at Parnham House/John Makepeace and has spent many years as a cabinet maker and furniture designer for private and corporate clients.  In 2003 he relocated to West Dorset and a new working environment surrounded by woodland. He continues to design and build contemporary structures using traditional craft skills but rather than commissions, these days he rents out the final products in a unique environment.

Guy Mallinson was the “wood mentor” on BBC2’s Master crafts series (which was filmed in the woods) and featured on George Clarkson’s ‘Amazing Spaces’.

Working in woodland reminded him of just how wonderfully sustainable a resource wood can be and this eco/environmental approach is reflected throughout.

In March 2021, LED Illuminations were contacted to supply a static LED ribbon housed in a surface extrusion which could be dimmed and also a multi-colour LED ribbon complete with control gear for Mallison’s latest project ‘The Pinwheel’ treehouse.

The Pinwheel Treehouse is set in a clearing between a ring of mature oak trees in a secluded corner of the bluebell wood.  This isn’t just any old treehouse but a treehouse that gives a perfect back to nature experience but with all the creature comforts. Inside, central, glass-topped living space is set beneath the tree canopy, with the surrounding spaces spinning outwards from it’. Full-height, one-way glass windows (facing the four points of the compass), provide stunning views and perfect seclusion. 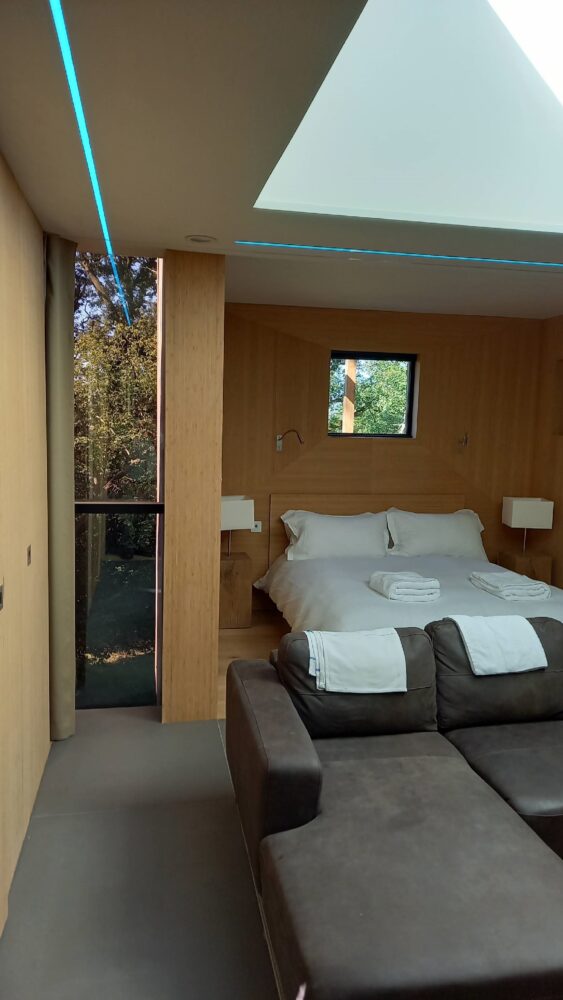 There is an en suite flushing loo, plus a separate shower and dressing room, while outside on the deck you’ll find sunset views, a wood-fired pizza oven, barbecue, hot tub, fire pit and a two-person swing. 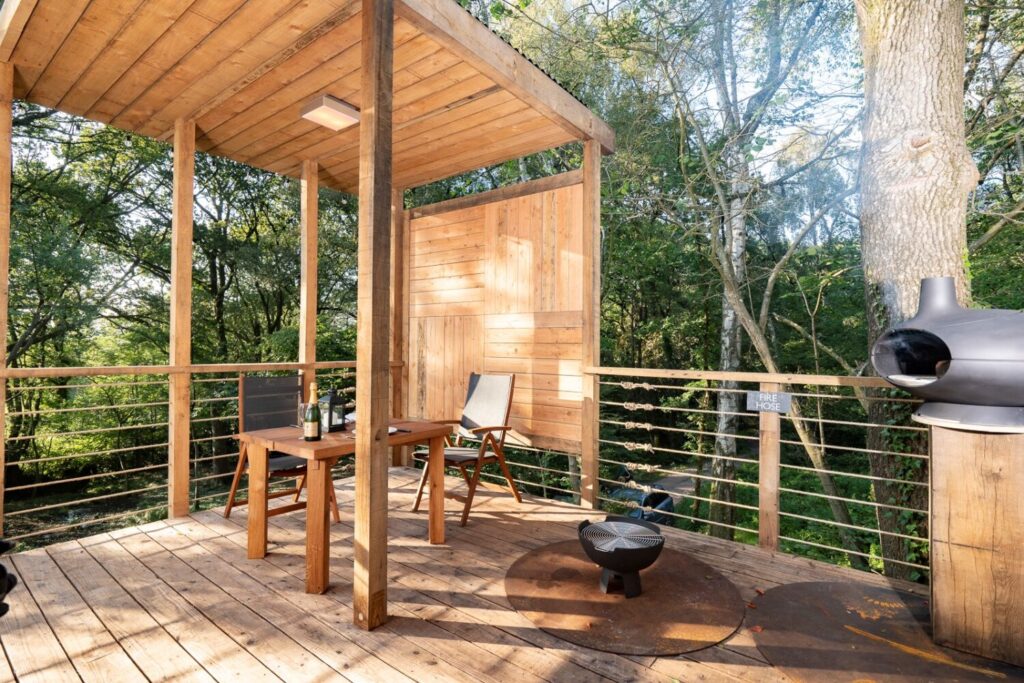 The effect is good, Guy designed it so that when inside the coloured LED appears to go right through the glass window and out into the woods. The name “Pinwheel” is with the firework in mind, the LED being the coloured spokes projecting out as it were.

The treehouse is on a raised platform to be among trees not actually built on one. Underneath, the LED floodlights and the stairs leading up have LED lighting concealed in the bottom of the rails
to the top. The outside lighting is triggered by sensors as you approach along the boardwalk giving quite a wow factor as you enter, these extinguish once you are inside.

LED Illuminations supplied our RGBW (colour change plus white (3000K)) LED ribbon which was housed in an extrusion which in turn was installed flush in the ceiling.  The frosted diffuser blended the colours to give a soft hew.  This was controlled by an LTech wireless wall plate (1 zone) which synchronised the lighting perfectly along with the wireless receiver.

Why not look at the Mallison website ESCAPE TO THE WOODS – (mallinson.co.uk), it may be the perfect escape you are looking for?

For further information on any of the LED products used in this application or others please call our sales team on 01492 233002.